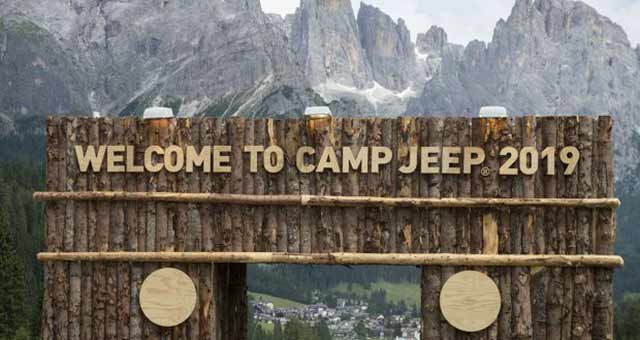 This year’s Camp Jeep® was a spectacular edition that succeeded in engaging the highest ever number of people in the history of the event: more than 700 Jeep vehicles and over 1,500 enthusiasts, including many families, children and teams from all over Europe, Africa and even Japan. A mix of different languages and cultures but a shared passion for adventures in true Jeep style.

The 2019 event was also the most eco-sustainable Camp Jeep ever staged: all the wooden logs used to set up the Camp Jeep venue came from trees which collapsed during storms that last October swept neighbouring woods to the area used for the event. These totalled 100 cubic metres of tree trunks, equal to 250 tons of wood without considering additional 360 cubic metres of woodchips.

All eyes were on the new Jeep Gladiator, which was first revealed to the world at the Los Angeles Motor Show at the end of 2018, marking the return of the brand to the pick-up segment after 27 years. As the ultimate vehicle for any outdoor adventure, the new Jeep pick-up truck will be launched across the EMEA Region (Europe, Middle East and Africa) next year.

Fans were also able to get behind the wheel of all models in the Jeep range, from the iconic Jeep Wrangler to Jeep Renegade, Jeep Compass, Jeep Cherokee and Jeep Grand Cherokee. And it was indeed this last vehicle that got visitors’ emotions racing, in the Trackhawk version, the fastest, most powerful Jeep ever featuring a 6.2-litre supercharged V-8 engine developing 710 hp.

The Mopar® 100% street legal customisation enhances the capability of Wrangler

The spotlight also fell on the new Jeep Wrangler 1941 designed by Mopar, the FCA brand dedicated to the after sales products and services for all the vehicles in the Group. Jeep Wrangler 1941 is a four-wheel drive vehicle with 100% street legal customisation, fitted with Jeep Performance Parts that further enhance its legendary off-road capability. The specific configuration of this model includes a 2-inch suspension lift kit, performance rock rails, black door sill guards, black fuel door, mudguards, all-weather mats and an optional snorkel. This is completed by the 1941 graphics that commemorate an important year for the Jeep brand: the birth of the Willys, also represented on other details of the vehicle such as the wheels, gear knob and tailgate table.
It will be available after the summer on all 2 and 4-door Wrangler 2.2-litre diesel models, and on all trims – including Sport, Sahara and Rubicon.

The Jeep world in the heart of the Dolomites

Unsurprisingly, the focus on the off-road experience was strong, and visitors were able to put the Jeep 4×4 models’ legendary capabilities and their own all-terrain skills to the test on several off-road trails with different levels of difficulty alongside expert Jeep Academy drivers.
There were also several areas dedicated to the discovery of the Jeep world – including the Academy, a Museum featuring a selection of historical models and the Mopar area, offering a full range of Authentic Accessories powered by Mopar for the new Jeep Wrangler 1941 and a selection of the new Mopar merchandising. It was also possible to discover Mopar Connect, the official set of connected services dedicated to Safety&security and Vehicle Remote Control.

The incredible party atmosphere of the event was heightened with an action-packed programme including outdoor activities, a panoramic Ferris wheel, live concerts, kids’ games and the Jeep Parade, which closed the three-day program dedicated to off-road driving and reached the Rolle Pass at an altitude of 2,000 metres.