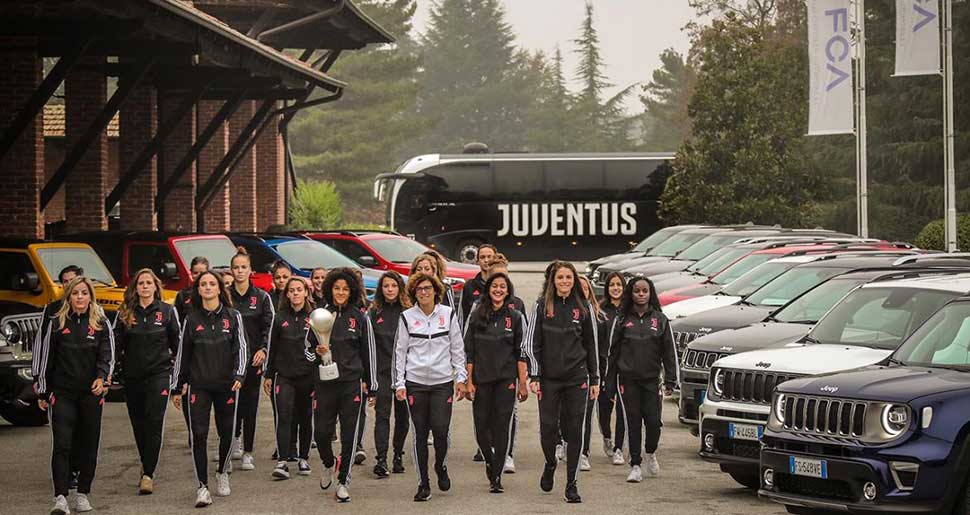 Jeep® is a brand that has seen its appeal to female customers increase exponentially. As a further confirmation of this special relationship, today, the Juventus Women champions took time out of their busy training schedule to experience the best of the Jeep SUV range at FCA’s Balocco Proving Ground. It was indeed an adventure-packed day of on-road and off-road driving for the Juventus Women team, who tested the Jeep Renegade, Compass, Cherokee, Wrangler and Grand Cherokee, including the powerful Trackhawk and SRT versions, alongside a group of Italian motoring female journalists.
Coach Rita Guarino and the team drove at high speed on the tarmac and tackled in 4×4 vehicles the tricky off-road course, especially designed to test the legendary capability of the brand’s four-wheel drive models.

Following their debut in the Serie A Italian soccer league in 2017, the Juventus Women have already won two Serie A championships, one Coppa Italia and one Supercoppa Italiana. Their ability to tenaciously pursue a focussed path to success, and to overcome every obstacle is consistent with the Jeep values. In two seasons since their Serie A debut, the Juventus Women were able to win four national trophies, tracing a new pathway to success.

The Jeep brand has pursued a similar path to success, recording its best September ever in Europe with almost 12,000 units sold last month. This confirms the positive results of 2018, when Jeep was the fastest growing brand in the European market. A discernible positive trend, which allowed the brand to increase its sales by 330% over the last five years.

Jeep Wrangler is the star of “Donnavventura”

Jeep is a brand highly appreciated by women with a growing customer base that now exceeds 20 percent of all buyers. Even more significant results are achieved in some countries such as France, where women account for 30 percent of Jeep consumers. In particular, Jeep Renegade and Compass are the models in the highest demand among female customers throughout Europe.
It is a further demonstration of how the values of the brand are able to gain the favour of women drivers who see their Jeep SUV as an extension of their personality and uniqueness, a vehicle with which to identify and be able to successfully take on the multitude of daily activities. A Jeep SUV is also a travel companion for any adventure they want to enjoy off the beaten track, in utmost safety. It is no coincidence that the legendary Wrangler will take a starring role in the new season of “Donnavventura”.  The Jeep icon will feature in the well-known Italian television program with focus on women and adventure, currently filming its first episodes.

Jeep and sport: shared values in many disciplines
The Jeep brand has a strong connection with the world of sport. This translated in the successful partnership with Juventus now in its eighth season and featuring seven consecutive Serie A championship titles for the Juventus men’s team with the Jeep logo on its jersey. And the four trophies won by the Juventus Women in only two years add to this extraordinary result. The Jeep brand also shares common values with the world of surfing and since 2015 has a global partnership with the World Surf League, which established the brand as the first-ever exclusive automotive partner of the WSL Championship Tour.
Furthermore, Jeep has been recently partnering with Wanderlust 108, the Mindful Triathlon dedicated to the world of fitness and wellness. In the last two years, this partnership has seen the brand attend several major European events of yoga lifestyle with the “Surfset” Yoga workout powered by Jeep.