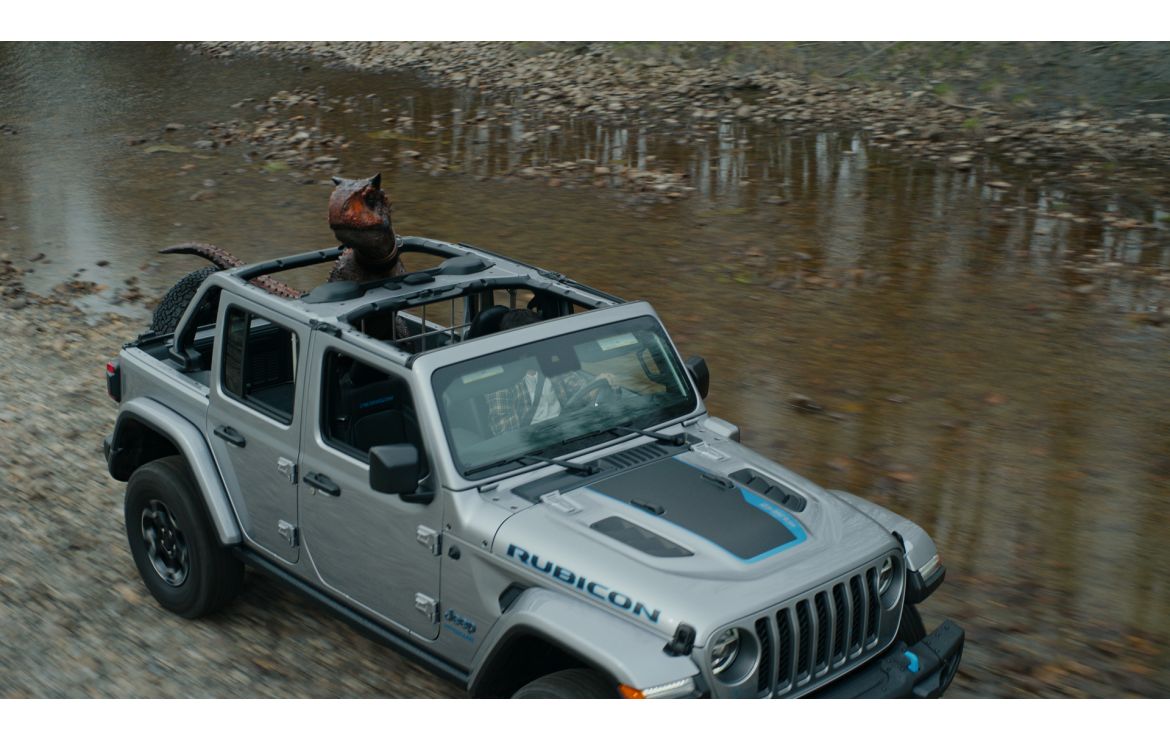 June 1, 2022, Auburn Hills, Mich. – The Jeep® brand and Universal Pictures are teaming up once again, this time to launch Universal and Amblin Entertainment’s new “Jurassic World Dominion,” the epic conclusion to the Jurassic era, which has thrilled fans around the globe for almost three decades and has earned more than $5 billion worldwide. “Jurassic World Dominion” arrives in theaters everywhere June 10.

The Jeep brand’s global campaign will run in markets around the world, including in North America, Europe, Middle East and Asia Pacific.

The marketing campaign in the U.S. will include a 30-second broadcast spot, content across Jeep brand’s social media channels, including an extended one-minute version of the TV spot and behind-the-scenes footage showing the making of the commercial, plus experiential events where members of the Jeep Wave community will be able to register to see the new film in select cities across the U.S.

“Almost 30 years ago, moviegoers saw Dr. Ian Malcom escape danger from dinosaurs in the original ‘Jurassic Park’ film while riding in the back seat of a 1992 Jeep Wrangler,” said Olivier Francois, global chief marketing officer, Stellantis. “We paid homage to that iconic scene in the Jeep brand’s 2018 Big Game commercial, which then featured the new Jeep Wrangler, as the next extension of our relationship with Universal Pictures. Here we are now in 2022, and we continue to see the evolution of the Jeep brand around the world with electric plug-ins, including the Jeep Wrangler 4xe and Grand Cherokee 4xe, which are quite literally charged for any adventure, this time with a four-legged passenger of a different kind riding along in the front seat.”

“The Jeep brand has substantially expanded in the three decades since the first appearance of the Wrangler in the original ‘Jurassic Park’ film,” said Christian Meunier, Jeep brand CEO. “We have entered into new SUV segments, we have increased our global production footprint and, with the rollout of our 4xe electrified portfolio that includes the Wrangler 4xe, the Jeep brand is developing the most capable and sustainable 4×4 vehicles in the world, satisfying the needs of our expanding global Jeep community.”

“The ‘Jurassic’ film series is known for its epic scope and thrilling action and ‘Jurassic World Dominion’ is taking audiences on an adventure where no ‘Jurassic’ film has gone before,” said David K. O’Connor, president, franchise management, brand management and global partnerships for Universal Pictures. “The Jeep brand has been driving our audiences on unimaginable adventures, on-screen and off, since the first film in 1993 and we’re thrilled to share the road with them, this time and every time.”

The one-minute Jeep brand commercial shows a Jeep Wrangler 4xe owner finding a newly hatched Carnotaurus in his own yard and deciding to faithfully take care of it. He takes the baby dinosaur on off-road adventures (engaging electric mode when quiet is called for!), while inducing both wide-eyed wonder from children and panic on neighborhood streets when he takes the dinosaur for daily walks along the avenue, before finding its mother during a camping adventure … with unexpected results. Turns out it was just his imagination running wild. Or was it?

In addition to the television and social media content, the Jeep brand is offering its Jeep Wave members the opportunity to see the film at drive-in events in cities around the U.S. on June 8, including Detroit, Chicago, New York, Miami, Los Angeles, and on June 9 in Warwick, New Jersey. Jeep Wave is a premium owner-loyalty program filled with exciting benefits and perks of being a Jeep SUV owner.

The Jeep brand and the Jurassic franchise have an enduring shared history. In 2018, prior to the release of “Jurassic World: Fallen Kingdom,” the Jeep brand launched a 60-second spot during the Big Game that paid homage to the iconic scene in “Jurassic Park” featuring the Jeep Wrangler.

The Jeep Wrangler, the Jeep Gladiator and a vintage Grand Wagoneer can be seen in the “Jurassic World Dominion” film.

The video was directed by Mimi Cave with the production company Reverie Content.

The Jeep brand campaign was created in partnership with Chicago-based advertising agency Highdive.

“Jurassic World Dominion”
This summer, experience the epic conclusion to the “Jurassic” era as two generations unite for the first time. Chris Pratt and Bryce Dallas Howard are joined by Oscar-winner Laura Dern, Jeff Goldblum and Sam Neill in “Jurassic World Dominion,” a bold, timely and breathtaking new adventure that spans the globe.

From “Jurassic World” architect and director Colin Trevorrow, “Dominion” takes place four years after Isla Nublar has been destroyed. Dinosaurs now live — and hunt — alongside humans all over the world. This fragile balance will reshape the future and determine, once and for all, whether human beings are to remain the apex predators on a planet they now share with history’s most fearsome creatures.