Electrification and training: the excellence of the FCA Melfi plant for the new production of Jeep® Compass for Europe, including the Plug-in Hybrid version 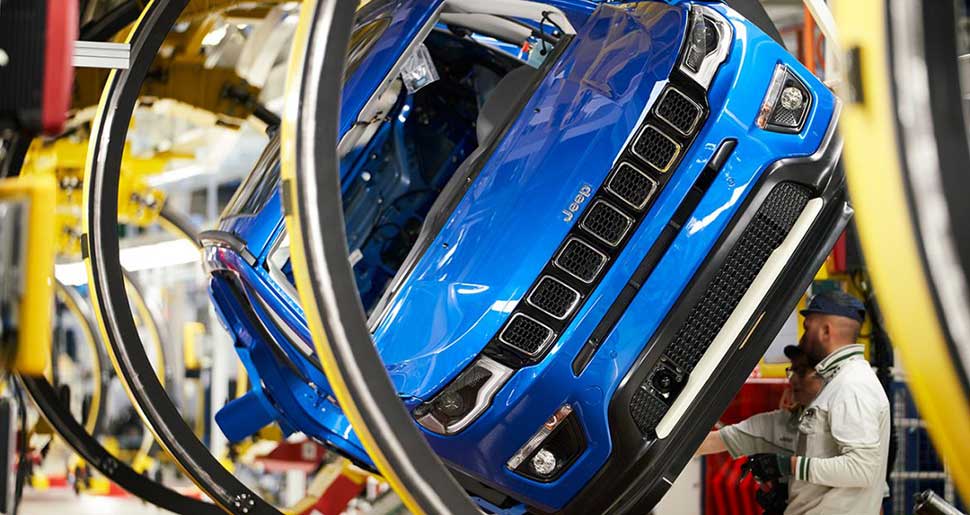 As a symbolic bridge between the past and future, today marks a dual celebration for FCA: the 25th anniversary of the opening of the Melfi Plant and the start of the first tests on the new Jeep® Compass production line to serve the European market. The growing success of the model, launched in 2016 and initially produced for Europe in Mexico, made it possible to bring production directly to Italy, including also the innovative Plug-in Hybrid version, to the Melfi plant in Basilicata, which has produced over 7.4 million cars since 1994.

In line with the 5 billion Euro investment plan that FCA announced for Italy, this is another important step in the evolution of the brand. It highlights both its vocation for technological innovation and the excellence of the Italian factory, one of the most innovative in the world. The plant was chosen in 2014 to create the first Jeep B-SUV: Jeep Renegade (900,000 units of which have rolled off the Melfi production line since launch). Manufacturing of the Jeep Compass in Southern Italy will begin in the first quarter of next year, producing vehicles for sale in the European market, followed by the production of the Plug-in Hybrid version both for Compass and Renegade. This will enable the Group to respond faster to customer needs and market dynamics.

In 2015, for the launch of the Renegade, the “Plant Academy” was created in the Melfi factory, a breeding ground for new ideas and experiments, and a “talent factory” for developing people’s potential. A significant contribution to FCA’s electrification strategy, it is a virtous example that has inspired numerous other FCA factories, where other Academy Plants have followed. The industrial centre in Basilicata is a natural choice for producing the Plug-in Hybrid Renegade and Compass for the EMEA region, the first Plug-in Hybrid Jeep models. A new chapter in Jeep’s legendary history, that will uphold the core brand values of freedom, adventure, authenticity and passion.

The Melfi plant was chosen not just for its location, but also on account of the many values it shares with the Jeep brand, such as the continuous quest for manufacturing excellence and sophisticated technological innovation. The Compass that will be built at Melfi shares the same features and, thanks to the innovative Plug-in Hybrid technology, will face the challenge of entering Europe’s largest and fastest-growing segment, the compact SUV sector. Currently, in Europe, it accounts for 45% of the overall SUV market and is forecast to overtake today’s 2.5 million units sold annually.

Produced in Mexico, Brazil, China, India and soon in Italy, Jeep Compass, supported also by the new electrified version, is truly a global model. It has a very special bond with the EMEA region and above all with Europe. When launched here in 2017, it was conceived as the first Jeep model designed specifically for European roads. This set the stage on which Compass is now starring, with over 78,000 vehicles registered in EMEA in 2018 – accounting for over 40% of the annual Jeep volumes. This makes it, along with Renegade, the best-selling Jeep model in Europe. This year, in Italy, Compass is confirming its leadership in the premium part of its segment: one out of three 4x4s sold in Italy in the C-SUV segment today is a Compass. With the new Plug-in Hybrid, it is ready to exceed this record.

Compass plays a strategic role for the Jeep brand and that’s why the brand continues to invest heavily in it. This can be seen in the recent launch of the peerless Trailhawk version – the C-SUV with best ever off-road performance – and the future launch of the new Plug-in Hybrid version, intended to revolutionize the entire SUV concept. The arrival of the Compass production in Melfi is a further step in this direction, backed up by the manufacturing excellence of the Italian complex. It was here that Jeep Renegade was born, the first Jeep B-SUV, contributing decisively to the extraordinary growth of 330% in registrations by the Jeep brand in EMEA over the last five years.

The FCA strategy is to not only electrify the range, while respecting the guidelines of each brand, but to also bring together an e-Mobility team to coordinate all activities related to electric mobility, ensuring that Jeep customers perceive mobility and the use of their car in a new way. To offer customers everything they need to drive an electric car on a daily basis and with peace of mind, a whole new ecosystem must be created for its use, in both a competitive and sustainable way. This will also require the signing a series of agreements with various partners such as Enel X, Engie, Terna, Transatel, Lexis Nexis and Generali, as has happened in recent weeks. The goal? To help customers choose the electric car that best suits their needs and provide a complete range of stress-free services.

Plant Academy: the future is a talent and ideas factory, towards electrification

Twenty-five years of intense experience, on the lookout for improvement, Melfi never stops.
Every day it looks towards a future that will bring new models, innovation, development and electrification. The future also passes through the Plant Academy, created on-site in 2015 as an important path towards the goal of “Industry 4.0”. The ‘Academy’ was invented as an experimental breeding ground of ideas and a “talent factory” focused on developing individual potential. Its goal was, and is, to improve the factory’s overall competitiveness, economic sustainability, product quality and capacity to create innovation.

Its initial task was to analyse people organisation and their roles, and the definition of the skills needed to perform each functional activity in the best way. The second step concerned Knowledge Creation in the new factory: each function was associated with a training package based on the experience and know-how of the best workers in the plant in each sector.
Next came methods for developing people’s skills, i.e. Leadership Development. Here, assessment tools and development paths were devised to stimulate and train those destined for more responsible roles. This meant that hidden talents could be discovered and guided along growth paths devised for them: until today, 119 growth paths have been developed, and over 300 training modules.
Learning via Academy training modules means repeatedly alternating classroom, simulation, verification and practical application. Every year – based on Group production and economic plans – the factory management establishes business objectives, and Plant Academy staff then define training courses accordingly. In Melfi, new technologies and new skills arrive together and work together, because personnel are first trained to use and improve them in simulation laboratories. Four main laboratories are used in the Plant Academy – for virtual process simulation, reproduction of logistic processes, digital areas and technical areas – all dedicated to the simulation phase of theoretical concepts – to help learning skills but also to research and test innovative solutions.
The Melfi Plant Academy offers an environment where people and creativity are central to everything. Those who have ideas to propose and skills to apply are free to express themselves, regardless of hierarchy and roles. In 2018 alone, 5,000 ideas were presented and discussed. Even the Academy’s aesthetics are unusual for a factory. Its rooms echo those of innovative Silicon Valley companies in California: brightly colored furnishings, study tools somewhere between gaming and hi-tech, screens everywhere and plenty of relaxation areas. All created internally with recycled materials, thanks to the effort and passion of factory personnel. The area is completed by various classrooms next door to the laboratories, so theoretical concepts can immediately be put into practice in simulation labs. Everything learned here is shared with the other FCA Plant Academies via a vast digital archive. The Melfi Plant Academy was a pioneer: its example has led many other FCA plants to create their own Academies.

Compass, the Jeep SUV playing in the largest and fastest growing segment in the world
Launched in 2017 and recently powered by new Euro 6D engines, Compass is the Jeep SUV that provides both the legendary off-road capability of the American brand and excellent driving dynamics. It has a modern design in pure, authentic Jeep style and a full array of advanced user-friendly connectivity and safety technologies.

25 years of the FCA Melfi Plant: the record-breaking factory with a leading role in FCA’s electrification process
This year marks 25 years of the FCA Melfi Plant, one of the most advanced automotive factories in the whole of Europe. It was reorganised in 2015 for the production debut of Jeep Renegade and Fiat 500X, with an investment of over one billion Euros.
Spread over an area of approximately 1.9 million square metres, the plant was built between 1991 and 1993 near San Nicola, 18 kilometers from Melfi. The site is on a road linking Basilicata with Campania and Puglia, regions where many plant workers come from. Currently it produces the Jeep Renegade and the Fiat 500X, and from the beginning of 2020 it will also produce the Jeep Compass and the Plug-in Hybrid models, playing a key role in FCA’s electrification strategy.
The factory complex contains areas for stamping, bodywork, painting and assembly and employs 7,300 people. It has 5 presses and 2 cutters for the molding phase; 860 robots for the bodywork phase; 54 robots for painting operations; 278 automatic screwing stations; and roughly 4,000 workers exclusively dedicated to assembling cars.
The FCA Melfi Plant is an emblematic example of technological and organisational evolution and has always been a shining beacon of innovation. It was the first to apply the “integrated factory” model, decentralising responsibilities and integrating functions compared to preceding rigid systems. It then evolved and applied “modular factory” and “network factory” models. It has always followed “lean production” principles and adopted functional mechanisms for improving competitiveness. Today, it performs as a digital factory that exploits enabling technologies and Industry 4.0 systems, with a platform that interconnects and integrates company processes, with maximum synthesis of organization, technology and people.